‘Something for my Native Town’ Conference November 2017 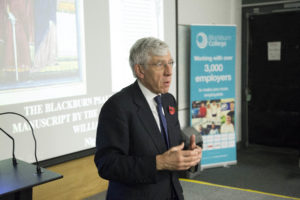 ‘Something for my native town’ conference, November 2017

On 10 November 2017, Blackburn Museum and Art Gallery in partnership with the Institute of English Studies, School of Advanced Studies, University of London, hosted a conference which focused on the manuscript and coin collections bequeathed to the museum by Robert Edward Hart in 1946. The museum’s academic partner, Dr Cynthia Johnston drew together a programme of speakers, each associated with world class research and cultural institutes, for the conference which was hosted by University Centre at Blackburn College. Each specialist presented research they had undertaken in visits to look closely at the collection since 2014.

Jack Straw welcomed over 70 delegates to University Centre. Attendees included members of the Friends of Blackburn Museum and Art Gallery, staff from John Rylands Library, University of Manchester, members of local interest groups such as the Calderdale Calligraphers and students and staff of Blackburn College.

In addition, the conference was preceded by a launch event on Thursday 9 November of Blackburn Museum and Art Gallery’s Level 2 research room opened with funding from Arts Council England to allow students, academics and visitors to study and engage with Blackburn Museum’s unique collections.

9:45- 10:15: Professor Nigel Morgan, Emeritus Honorary Professor of the History of Art at the University of Cambridge

The Blackburn Psalter: a thirteenth-century manuscript by the artists of the Bible of William of Devon.

The English illuminated Psalter of c. 1260-80, Blackburn, Museum and Art Gallery 091.21001, is among the most important books bequeathed by R. E. Hart to the Museum in 1946, and has come to be known as the ‘Blackburn Psalter’ in the scholarly literature. The Psalter is illustrated by many full-page miniatures and historiated initials, and is closely related to a group of other Psalters, Books of Hours and Bibles made perhaps in Oxford in the 1260s and 1270s. The central manuscript of the group is a Bible in the British Library written by a scribe named William of Devon. He is the only one of the scribes and artists who made these books whose name we know, and he has given his name to the group. This lecture will discuss the illustrations of the Blackburn Psalter and their relationship to those in other English manuscripts of the thirteenth century

Nigel Morgan is Emeritus Honorary Professor of the History of Art at the University of Cambridge, and a former Fellow of Corpus Christi College. Earlier in his career he taught at the universities of East Anglia, London, Melbourne and Oslo. In the 1980s for five years he was Director of the Index of Christian Art at Princeton University. His main research interests are: late medieval English illuminated and liturgical manuscripts, with a special interest in Apocalypses and the iconography of devotional images. He also works on medieval stained glass and is preparing the Corpus Vitrearum Medii Aevi for the county of Kent

The lavishly illuminated Book of Hours from the southern Netherlands that forms part of the Hart Collection in Blackburn (Hart 20884) contains the most innovative work of one of the leading miniaturists of the late fifteenth century. No previous study, however, has explored in detail the art and innovations of the book. The present lecture will undertake a fresh appraisal of the volume and identify its particular contribution to our understanding of Netherlandish illuminators and their work.

Dr. Scot McKendrick is Head of Western Heritage Collections at the British Library. He is the author of numerous publications on illuminated manuscripts, including Illuminating the Renaissance: the Triumph of Flemish Manuscript Painting (2003) for which he and Thomas Kren won the Eric Mitchell and Eugène Baie prizes. His most recent book, jointly authored with Kathleen Doyle, is The Art of the Bible: Illuminated Manuscripts from the Medieval World (2016).

This paper focuses on an album consisting of 31 leaves with miniatures extracted from a late 15th century French book of hours (HART 20984). While all its miniatures have until now been attributed to the Master of the Paris Coeur d’Amour Espris, also known as the Master of the Beaussant Retable, a closer look presents us with a more complex picture.

Catherine Yvard is Special Collections Curator at the National Art Library at the Victoria and Albert Museum, London. She worked previously on digitisation projects at the Chester Beatty Library, the Bodleian Library and the British Library. Specialising in late medieval manuscripts and Gothic ivory sculpture, she managed the Gothic Ivories Project at The Courtauld Institute of Art from its inception in 2008 to 2015.

Toward a History of Early Printing Used as Binding Waste.

Hundreds of fragments of Europe’s earliest typography are preserved as recycled material for binding later books. More than occasionally, the binderies associated with these fragments can be located in time and place, providing evidence of when and where these otherwise lost early books were used before they were discarded as binding waste. Dr. White places the Hart collection’s fragments of the Mainz Psalters of 1457 and 1459 into this broader historical context, matching them with several other fragments preserved from the identical Psalters, and comparing their histories with those of other books printed in Mainz, ranging from recycled schoolbooks to lost copies of the Gutenberg Bible.

Eric Marshall White, PhD, is the Curator of Rare Books at Princeton University’s Firestone Library. He came to this position in Fall 2015 with 18 years of experience as Curator of Special Collections at Southern Methodist University’s Bridwell Library. His research interests center on the earliest European typography, and he has published articles in this field in Gutenberg-Jahrbuch, The Book Collector, Quaerendo, and the Transactions of the Cambridge Bibliographical Society. His first book, Editio princeps: A History of the Gutenberg Bible (Fall, 2017), traces the fortunes of all of the surviving copies, with particular emphasis on their rediscovery in monastic contexts during the eighteenth century.

1:30-2:15: Dr. Rebecca Darley, Lecturer in Medieval History at Birkbeck, University of London Collections to think with: the Hart coin collection then and now.

Rebecca reflects on the value of the Hart coin collection, and similar collections in the Northwest, as tools for research, both for scholars and enthusiasts. Hart himself not only collected coins, but was an active participant in the study of numismatics. He ordered and purchased his collection with scientific principles in mind, kept up-to-date with new publications, and was a lifelong member of the Royal Numismatic Society. He corresponded with auction houses in London and Switzerland and kept in touch with a network of other collectors in Yorkshire and Lancashire.

Rebecca Darley is Lecturer in Medieval History at Birkbeck, University of London. Her research focuses on the western Indian Ocean c. 300-900 and the monetary landscape of the eastern Mediterranean in Late Antiquity. She is also an active member of the Royal, Oriental and South Indian Numismatic Societies and the Society for the Promotion of Byzantine Studies and runs the online image repository, the Birmingham East Mediterranean Archive (BEMA).

2:15-2:45: Dr. Cleo Cantone, Hart and the ‘Orient’: Between Conjecture and Imagination in his Islamic Collection.

Where, when and why Hart purchased a series of Islamic manuscripts, miniatures and artefacts is unknown. Indeed, prior to the exhibition at Two Temple Place, From Cotton to Gold, this part of Hart’s collection appears to have been a black hole among scholars of Islamic art. My contribution lies in disseminating my findings on a selection of Hart’s so-called Oriental collection in the form of the re-display of the Sacred Texts case in the Blackburn Museum. Based on the theme of Pilgrimage and Holy Cities, the items on display focus on the depiction of Jerusalem, Mecca and Medina. I have selected illuminated and printed texts highlighting aerial views of holy cities, playing on the notion of both bodily and imaginary pilgrimage.

Cleo Cantone is an art historian and author of Poem on Algiers (an English translation of Le Corbusier’s Poésie sur Alger, 2016) and Making and Remaking Mosques in Senegal (2012).  Specialising in the mosque architecture of North and West Africa, she has also a long history of researching issues of gender and space in Islam. With a passion for museums and material culture, she has recently turned to curating and has curated a display of Islamic manuscripts held in the Blackburn Museum and Art Gallery.

Session 4: ’For what purpose do they spend?’ Motivations and context for the Hart Collection

Glossing the gloss: Interactions between readers and their books in the Hart Collection.

The Hart collection presents the history of the book in microcosm. The aim of its collector was clear: to illustrate the progression of the written word from clay tablet to printed book and beyond. Unwittingly, however, Hart also created a museum of book ownership and use. This paper will examine the complex and varied interactions between readers and their books, as evidenced in the Hart Collection.

Ed Potten is a Research Associate in the Department of History at Durham University and with the Centre for Medieval Studies at the University of York and a freelance bibliographer. He was formerly Associate Director (Special Collections and External Relations) and Joint Head of Rare Books at Cambridge University Library.

3:45-4:15: Dr. Cynthia Johnston, Lecturer in the History of the Book at the Institute for English Studies, School of Advanced Study, University of London

‘Given me by Mr. Maggs’: the Revelations of R.E. Hart’s ‘Connoisseur’s Library’

Some three hundred books of bibliographical reference accompanied Hart’s gift of his collection of manuscripts and books to the Blackburn Library in 1946. My work on these volumes has revealed that Hart purposefully left previously unexamined handlists and other material related to his collections in these volumes. Beyond the handlists which are divided up into manuscripts, incunables and reference books, are Hart’s additions to the texts themselves most often in the form of indexes. Some of the entries in the handlists are in code, and the indexes display complex referencing systems. This paper will discuss my progress on the self-styled ‘Connoisseur’s Library’ and what it reveals about Hart’s collecting practices, his networks and his aspirations as a collector.

Cynthia Johnston is a Lecturer in the History of the Book at the Institute for English Studies, School of Advanced Study, University of London. She has been Course Tutor for the MA in the History of the Book at IES since 2013. Her core research interest in pen embellished decoration to thirteenth-century manuscripts first brought her to the Blackburn Museum and Art Gallery. She has curated exhibitions of the Hart collection at London’s Senate House Library and 2 Temple Place. She leads the academic partnership between the IES and Blackburn Museum and Art Gallery.

This paper will consider a range of collectors cross the north-west, especially in the eighteenth-twentieth centuries, and examine some of their reasons for collecting, as well as what has become of their work. It will present a comparative background to Hart, and look at the place of museums, art galleries, libraries and local authorities in meeting the hopes of these enthusiasts.

Professor David McKitterick FBA was until recently Librarian of Trinity College, Cambridge. He is the author of several books on the history of libraries and on the understanding of old books by different generations. 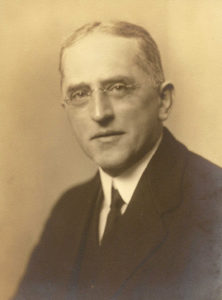