‘Spot the Birdy 1 – No… I said Bustards’ by Stephen Irwin 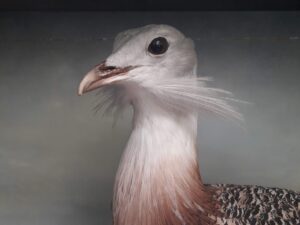 I have been a member of the Royal Society for the protection of Birds (RSPB) for most of my adult life. Whilst I am not a keen birdwatcher, I do take an interest in wildlife and for this short series of blog posts I have chosen birds that I particularly like. I am going to start off with a bird that I have never seen but which looms large in the Museum, the Great Bustard.

At the top of the stairs is a large case that features two stuffed birds, a male and female Great Bustard. These are two beautiful examples of the Victorian Taxidermist’s art. Both are imposing specimens, the male especially so. This is not surprising as this is the heaviest flying land bird (at 20kg) and an adult male can stand up to a metre tall and has a wingspan of 2.5 metres.

Sadly, the Great Bustard is not doing well in the wild. It is a European bird but is has been in long-term decline due to loss of habitat. It is on the Red List of threatened species.

Spain and Portugal have 60% of the world population. It was resident in the UK but our last specimen was shot and eaten in 1832 and the species was extinct in Britain until 2004. In that year 20 birds were released onto Salisbury Plain, in Wiltshire. These birds were rescued from agricultural operations in Russia. More releases have taken place and I am glad to say that the birds have successfully bred. 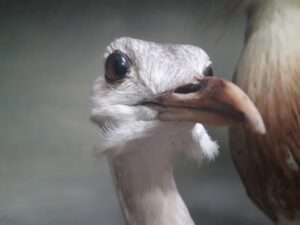 Great Bustards need large areas of open land and can adapt successfully to arable farmland and the farmland in Wiltshire has proved ideal, especially so because it is used as an army training ground, which means that, beyond an occasional passing tank, they are undisturbed. Such big birds need a large open area to take off and land; despite their large size, they are fast-flying birds and some have been killed flying into obstacles.

It looks like the reintroduction of the Great Bustard to the UK has been a success and if you are very lucky you may well see these magnificent animals in the wild. Otherwise, pop into the Museum to have a look at our two fabulous specimens.