The Dunn Collection – finding the needles in the haystack

5 June 2020
By Philip Crompton
Philip Crompton is a Community History Volunteer at Blackburn with Darwen Library and Information Service. He has made many discoveries with regard to the Dunn Collection some of which are highlighted in this and following posts.

The donation of book collections to local museums and libraries is not new and certainly not the singular preserve of Blackburn. Many towns and cities gratefully receive these literary gifts, which usually originate from a prominent figure in the community; a captain of industry or a well-known philanthropist.

This is where the Dunn Collection “goes against the grain” which creates its own challenges when researching the people and events behind this donation. 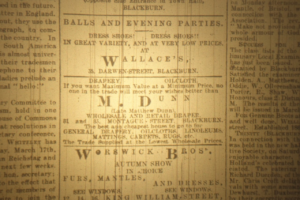 James Dunn was a humble draper trading from premises on Montague Street; his shop and home sitting side by side in this strong working-class area of Blackburn. In the early 1940’s he contacted the Blackburn Museum and Library to set in motion the gift of his collection – over 300 books – nearly seventy of which date from before 1699 – two paintings and some pottery to the community. This work had been amassed by him on his travels in this country and the near continent, particularly France. The books cover a broad spectrum of subjects in a variety of languages but with no common theme. I think it is fair to say this was the first anyone knew of his passion outside his immediate family and friends.

He was now approaching his mid-seventies and by all accounts in good health. Though I would imagine he felt a little lonely with his wife pre-deceasing him in 1907; his son Ernest had emigrated to South Africa just after World War One had ended, and his daughter now lived in Wigan. He was the eldest of five brothers and two sisters and had managed to outlast them all save the youngest, Norman, who had emigrated to America many years ago. The Dunn clan was fading away. 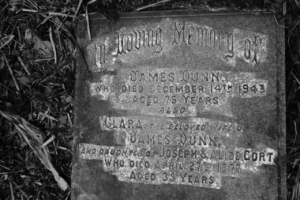 This was his opportunity to share his collection with the town that he loved. He did this whole-heartedly.

It does however leave us with several unanswered questions which cannot be fully answered by genealogical research alone.
What motivated him to collect this body of work? – we know that he taught himself French to enjoy books acquired in that language – so these are not trophies to display and impress others. How did he fund these purchases? And who ran his business when he was away on one of his buying excursions? And what of his possible relationship with Robert Edward Hart, a wealthy local businessman, who had a similar passion for books but no clear contact with Mr. Dunn, yet appeared on the list of mourners in Dunn’s obituary? I feel sure there is a little more to come on this remarkable man.