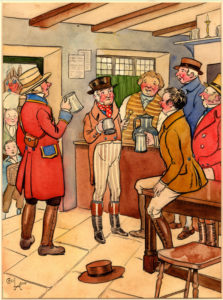 5 May 2020
By Dr Cynthia Johnston, Institute of English Studies, School of Advanced Study, University of London

The selection of works by Cecil Aldin (1870-1935) bought by Hardcastle for his collection give an accurate summation of the range of Aldin’s subjects. Whether the artwork was intended for an adult or a juvenile audience, the genre prose, poetry or calendar illustration, Aldin’s focus was always country life. Dogs chasing cats, cats getting the better of pursuing dogs, dogs sleeping, lounging or hunting, horses at rest or at work, cosy pubs and firesides are Aldin’s staple repertoire. His work for children’s magazines and books also demonstrates his favoured choice for context. Even when his subjects were fairy tales or poetry, Aldin placed his subjects in a fictive natural world. He also favoured early Victorian timeframes for his illustrative work. The example we explore here today, Pickwickian Scene, is an excellent example of Aldin’s Victorian contextualising. Produced as part of the illustrations for the 1910 publication of Charles Dickens’ Pickwick Papers, this is a classic Aldin pub scenario. The customers have ruddy cheeks, the publican is jolly, the ceilings low, and a laugh is shared by all, perhaps at the expense of the incongruously dressed central figure. 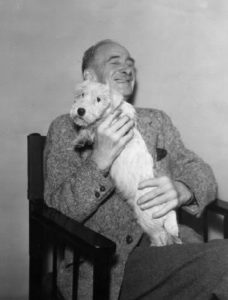 While Aldin comes close to caricature in his depictions of both animal and human subjects, his attention to naturalistic detail, especially with regard to his animal subjects, keep his work just shy of satire. Like Dickens’ treatment of Mr Pickwick and his circle, Aldin has tremendous fun with eccentricities of character and action. There is a central Dickensian humanity to Aldin’s work, that gave it tremendous appeal to a public that perhaps had not any experience of the sort of lives that Aldin suggested through his illustrations. 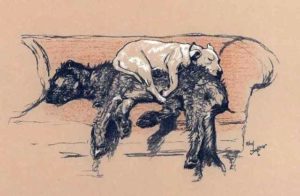 Like his friend John Hassall (whom we featured in yesterday’s blog), Aldin gained his first commissions from the world of advertising, working on a campaign for Cadbury’s in the last years of the 1890s. He was also a regular contributor to the Illustrated London News during this period, an association that continued for most of his career. Aldin was a keen sportsman, and was especially devoted to fox hunting. He was Master of the South Berkshire Hunt and founded an RAF beagle pack. His most popular subjects were his portraits of both dogs and horses. His two favourite models were his bull terrier, ‘Cracker’ and his wolfhound, ‘Micky’. His 1901 publication, Sleeping Partners, features these two old friends.