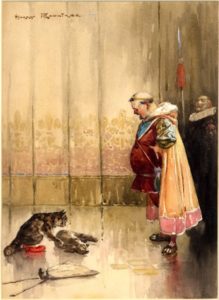 Harry Rountree (1878-1950), Puss in Boots, watercolour and gouache on card. On loan from Towneley Hall Museum and Art Gallery.

7 May 2020
By Dr Cynthia Johnston, Institute of English Studies, School of Advanced Study, University of London

Harry Rountree (1878-1950) was at the height of his career probably during the first decade of the 20th century, when he produced illustrations for a vast array of periodicals and novels by popular writers including Sir Arthur Conan Doyle and P.G. Wodehouse. As the two examples we have used here demonstrate, Rountree also found tremendous success with his depictions of animals, especially in the context of children’s book illustrations. When Rountree arrived in London as a young man in his early twenties from New Zealand just after the turn of the century, he pursued the new markets for children’s book illustration like many of the artists of this generation whom we have discussed previously. With a market crowded with the likes of John Hassall, Stephen Baghot de la Bere, Harold Copping and Cecil Aldin, the competition was fierce with regard to work, and Rountree soon specialised in his depictions of animals, especially the fantastical.

Like his contemporaries, Rountree supplied many hundreds of illustrations to the periodical market for both adult and juvenile readers. His work appeared in The Strand, Cassell’s, Pearson’s, The Sketch, and the ubiquitous London Illustrated News and the children’s magazine Little Folks also carried many of his illustrations. However, a search of current auction prices for Rountree’s work reveals that much of his surviving productions appeared originally for Punch over a 30-year period. His reputation also survives through his illustrations for Lewis Carroll’s Alice’s Adventures in Wonderland published by Thomas Nelson and Sons in 1908. Indeed, first editions of this book sell for at least £2000, far more than the prices achieved by Rountree’s original art for illustration at auction.

Although Rountree supplied the illustrations for periodical publication of the works of extremely successful writers of fiction, such as Conan Doyle and Wodehouse, his work was not used for the book format of the serialized novels. Here Rountree seems to have really lost out in terms of reputational survival and financial return. For example, Conan Doyle’s The Terror of Blue John Gap (1910), The Lost World (1912), and The Poison Belt (1913) were all originally published in parts in The Strand. However, when these stories appeared in book form, Rountree was not chosen to supply the illustrations. This must have been extremely disappointing, especially with regard to major illustrative campaigns such as the 46 pictures supplied for The Lost World, and the 23 which accompanied The Poison Belt in The Strand. The superbly imaginative illustrations that Rountree produced for The Lost World, which feature a range of extraordinary dinosaurs, were published in 1996 in The Annotated Lost World, edited by Roy Pilot and Alvin Rodin (Wessex Press). David Martill and Tony Pointon have argued that Conan Doyle, and the illustrators of The Lost World, are responsible for popular interest in and enthusiasm for pterodactyls, a phenomenon which shows no signs of diminishing even in 2020. [1] 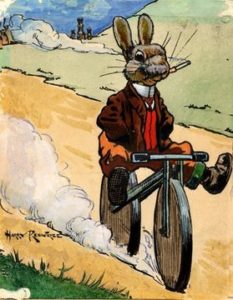 Rountree’s work was universally admired and well-known before the Second World War. He was a member of the London Sketch Club, like so many of the artists featured in Hardcastle’s collection, but his reputation seems to have waned in the 1940s. According to the biography of Rountree on the Pook Press website, Rountree died in St Ives in Cornwall in 1950 largely forgotten and in poverty. [2]

We are having a short break from the Holding the Vision exhibition next week but we will be back again on Monday 18 May to introduce The James Dunn Collection from Blackburn with Darwen Library and Information Service. See you then!