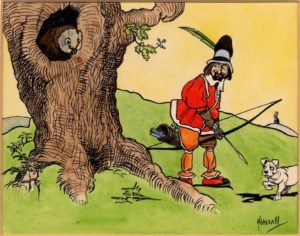 John Hassall (1868-1948), The Archer, watercolour and ink on card. On loan from Towneley Hall Museum and Art Gallery.

19 May 2020
By Dr Cynthia Johnston, Institute of English Studies, School of Advanced Study, University of London

Here is another example from one of Edwin James Hardcastle’s favourite artists, the ‘Poster King’, John Hassall. John Hassall (1868-1948) was a central figure in both poster design and children’s book illustration from the late 1890s through the Second World War.

Our example today, ‘The Archer’, may have come from one of the many alphabet books illustrated by Hassall. ‘A is for archer’ seems a good fit with this illustration, but I am unable to confirm the identification with certainty. Hassall worked on a variety of these popular alphabet books including The Pantomine A.B.C, by Roland Carse, (London: Sands & Co, 1907), An ABC of Every-Day People by G.E. Farrow (London: Dean & Son, 1902) and Round the World ABC also with verses by Farrow (London: Ernest Nister, 1904) although the Pantomine seems the most likely match for ‘The Archer’. Old-Fashioned Nursery Rhymes and Tales is another possibility. Hassall was famously prolific, as this teasing contemporary description of him from The Bookman, an Illustrated Magazine of Literature and Life, indicates; ‘Mr John Hassall is an artist who designs posters with his right hand, paints works of art with his left, and illustrates books with his teeth’ (Vols. 37-38, 1913, p. 130).

Hassall was endlessly entrepreneurial, and after his first school of art and illustration closed at the start of the First World War, he opened a correspondence school based in St. Albans, The John Hassall Correspondence Art School. An advertisement for the school promises that if you ‘like’ drawing that this course can elevate your skill (possibly) to a money-making professional standard. John Hassall certainly lived the life of a successful professional artist who engaged with new modes of advertising enhanced by new technologies in production and colour printing. His use of simple lines, bold colour as well as a superb eye for caricature meshed with the new technologies making him one of the most recognisable artists of his time. Perhaps it is because much of his work was ephemeral in the form of posters and other advertisements, that Hassall’s name is not as well remembered as some of the other artists in Hardcastle’s collection.