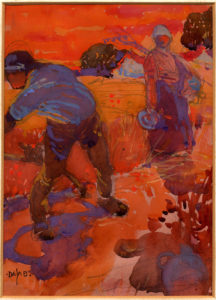 1 May 2020
By Dr Cynthia Johnston, Institute of English Studies, School of Advanced Study, University of London

One of the great delights of writing this blog is the opportunity it offers for further research into the artists whose work Holding the Vision displays. The subject of today’s post has been a long-standing mystery for me and for the curators at Towneley Hall Museum and Art Gallery, as we have worked on the show. Despite our searches, the artist who painted The Reaper, ‘S.B. de la Bete’ as he is listed on the acquisition list, remained elusive. However, I now feel fairly confident that I have discovered his identity.

Trawling through the archive of the Royal Institute of Painters in Watercolour revealed no exact match for de La Bete. In fact, there is only one historic member whose name carries the French genitive, and that is a painter listed as Stephen B. de la Bere, also known as Stephen Baghot de la Bere. De la Bere’s dates (1877-1927) match closely with the other contemporary painters whose work appealed to Hardcastle. De la Bere was a well-known illustrator, mostly of periodical fiction, but he also illustrated 13 books, according to Worldcat, which appeared in English, French and Spanish. His illustrated edition of Cervantes’ Don Quixote appeared in 8 editions published between 1905 and 1928 (in English), 4 editions of Jonathan Swift’s Gulliver’s Travels published between 1904 and 1942, and The Adventures of Punch published in 1905 in three editions. His Don Quixote was also published in Spanish, and the Swift in French. He illustrated a satirical poem in the style of Lewis Carroll’s The Walrus and the Carpenter called A Carroll (with apologies to the late Lewis) by (Captain) Denis Kelly. This poem, published in 1918, substitutes the harvest of oysters with that of soldiers filling up hospital beds during the First World War. Stephen Baghot de la Bere himself served as a lieutenant in the Royal Garrison Artillery in France.

Stephen Baghot de la Bere was born at Burbage Hall in Leicestershire. He was the youngest son of Kinard Baghot de la Bere (1879-1904) a descendent of an old Herefordshire family. The house still stands today in the village of Burbage with a blue plaque which commemorates Kinard Baghot de la Bere. Kinard was an engineer, the inventor of the preservative, isinglass, still used widely in brewing today, (although an issue for vegans as it is derived from the swim bladders of fish). Stephen was trained at the Royal Academy and exhibited widely in galleries in London, Paris and Venice. He was elected to the Royal Institute of Painters in Water-Colour in 1907. He was also a member of the London Sketch Club. In an invitation to the club’s centenary celebration in 1998 with named shadow profiles of past members, de la Bere appears between the famous poster artist, John Hassall, and Cecil Aldin; works by both are held in the Hardcastle collection. 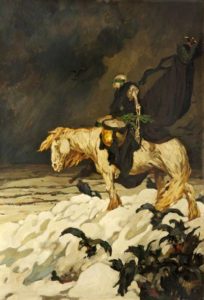 De la Bere’s work is still widely available at auction. Gallery curators generally describe his watercolour style as fluid and atmospheric. Although both of these descriptions could be applied to The Reaper, and the signature does seem to match that of de la Bere on the works I have been able to access online, identification of the painting in one of de la Bere’s publications would be the last word in confirmation of the painting as his work. This I am unable to do at the moment, but the British Library does hold most of de la Bere’s books at least, and, when I can, I will attempt to finally resolve the mystery of The Reaper. For comparison here is another example of Stephen Baghot de la Bere’s work.