Indian Book Painting from Jahangir’s Album in the State Library in Berlin, Kühnel and Goetz 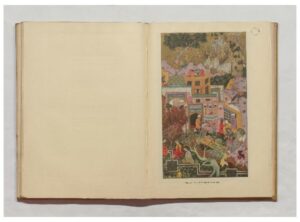 Illustration, ‘Scene at the gate of a town’, 1618. Ernst Kühnel and Herman Goetz, Indian Book Painting from Jahangir’s album in the State Library in Berlin, (London: Kegan Paul, Trench, Trubner, 1926). On loan from Harris Museum, Art Gallery and Museum.

The Jahangir’s Album is a collection of paintings (miniatures) commissioned by the fifth emperor of the Persianate Mughal Empire of India, Emperor Jahangir (1605-27). Jahangir was a great patron of the arts, following the example of his father Akbar the Great (1556-1605), especially the art of the miniature for book painting. The example here is a muraqqa, an illustrated album containing miniatures, exquisite calligraphy and intricate borders. In addition to the albums, Jahangir commissioned illustrated copies of literary works including epics, biographies and memoirs. He ordered the artist, Ustad Mansur, (Nãdir-al-’Asr, the ‘master of the age’) to paint the flora and fauna of his empire. Mansur painted over 100 flowers as part of this project. His paintings have naturalistic precision with vibrancy in colour and fine balance in the mise en page. Only three of these are known to survive, and it has been suggested that these floral portraits show the influence of European herbals, particularly Portugese influence. (1) We have seen this type of herbal in the Dunn collection. The script used was the Perso-Arabic script known as Nastaliq. In a literary context, the language, which was a Persianized form of Hindustani (Urdu), retained the vocabulary and literary conventions of both Arabic and Persian traditions. 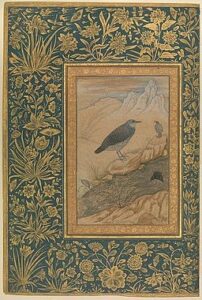 This muraqqa, commissioned by Jahangir, is now dispersed with the majority of its leaves divided between the former Gulistan Palace in Tehran and the State Library in Berlin. It contains examples of the finest work produced during Jahangir’s reign. The field of the calligraphic pages is often gold, and their organization follows fifteenth-century Persian style. It is a collection of individual paintings, with two pages of calligraphic art facing each other often followed by two associated figural paintings. One of the most important aspects of Jahangir’s patronage of the art was his interest in the individual work of his artists. Moving away from the models used during his father’s time where artists with particular specialties contributed to a painting, Jahangir developed the individual artistic styles of his artists. As Milo Cleveland Beach noted, Abu al-Hasan and Bishan Das were noted for their imperial portraits, Govardhan for his paintings of holy men and Ustad Mansur for his birds and animals.(2)  In his memoirs, Jahangir described his ability to identify the work of court painters: 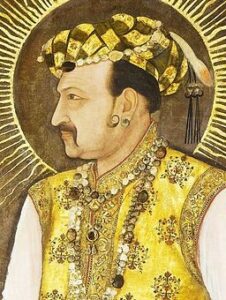 As regards myself, my liking for painting and my practice in judging it have arrived at such a point that when any work is brought before me, either of deceased artists or those of the present day, without the names being told me, I can say on the spur of the moment that it is the work of such and such a man.(3)

Jahangir’s patronage of the arts, and his interest in the individual style of his painters was a significant influence on the development of Indian art.

This edition of the Jahangir’s Album was produced by the German art historians Ernst Kühnel  and Herman Goetz. It is an excellent example of the continuing expansion of the Private Press Collection in the direction of fine art.