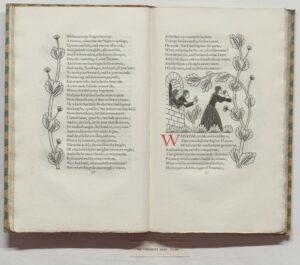 This edition of Chaucer’s Canterbury Tales  is one of the most famous productions of the Golden Cockerel Press, founded by Harold (Hal) Taylor in 1920. By the time of the Canterbury Tales, the press had been bought by the wood engraver, Robert Gibbings, in 1924. Under Gibbings stewardship, the press continued true to the aims of the original founders in the spirit of a cooperative venture  with a democratic blend of contributions from both artists and artisans. Gibbings and his wife Moira worked closely with the printing staff, and produced books which reflected the artisan aspirations of the private press movement. Before the press was sold in 1933, and when it in fact became a publishing house as opposed to a private press, the Golden Cockerel produced 71 books. The Canterbury Tales is one of the most successful of these. This is one of only 485 copies printed on Batchelor hand-made paper with wood engravings by Eric Gill. 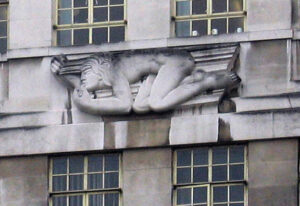 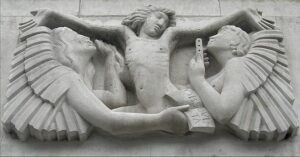 While Gill was the most celebrated graphic designer of his time, and the importance his contributions to 20th century design are undisputed, the publication of Fiona McCarthy’s biography of Gill in 1989 rocked his reputation. Revelations of Gill’s sexual practices, which involved both bestiality and incest, provoked the question as to whether his art could still be admired in the context of his sexual mores. Gill’s sculptures adorn many public monuments  including what is now the office of Transport for London on 55 Broadway Saint James, and Broadcasting House, in London, as well as the art deco masterpiece, the Midland Hotel in Morecambe. His most popular typeface is Perpetua, but he designed many others including Gill Sans, Solus and Joanna. Gill’s work is part of the fabric of our lives in twenty-first century Britain. However, he remains an uncomfortable presence in modern design whose life choices force us to examine whether his actions should influence our response to his art.