The Harris Private Press Collections by Dr Cynthia Johnston: The Plays of Euripides

The Plays of Euripides, translated by Gilbert Murray, published by the Gregynog Press, 1931 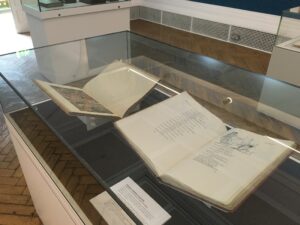 The Plays of Euripides, translated by Gilbert Murray, wood-engravings by Robert Ashwin Maynard and Horace Walter Bray, vol. 1, (Newtown, Powys, Wales: Gregynog Press, 1931). On display in Holding the Vision exhibition. On loan from the Harris Museum, Art Gallery and Library.

The Gregynog Press was initiated by two sisters, Gwendoline and Margaret Davies, who were independently wealthy philanthropists who had inherited an industrialist fortune. In 1920, the sisters bought Gregynog Hall near Newtown, Powys from their brother with the intention of turning the house and its environs into a haven for art and artists. While the press was a key project most particularly for Gwendoline Davies, they also invested significantly in fine art accumulating an internationally significant collection. 260 works of art from their collection were donated to the National Museum of Wales in 1960, and Gregynog Hall itself was gifted to the University of Wales which was in possession of it until 2019. The Special Collections library of the Museum of Wales holds on permanent loan all the books produced by the press which were in the possession of Gwendoline, each one in a special binding. The press, Gwasg Gregynog, is still in operation, although after the death of Gwendoline Davies in 1954, Margaret Davies gave the press’ original machinery to the National Library of Wales. The press today does some typesetting by hand, but most typesetting is done with a Monotype machine. A Heidelberg Cylinder Press produces the printing.

Robert Ashwin Maynard was central to the activities of the Gregynog Press, as was the skilled printer, Herbert John Hodgson. Perhaps after the Kelmscott and Doves presses, the Gregynog produced some of the finest work to come from the private press movement. Maynard was the director of the Gregynog for the Davies sisters until 1930. As well as contributing illustrations for the Euripides volumes, Maynard designed the illustrations for Henry Vaughan’s Poems and Milton’s Samson Agonistes. As we have seen, the high cost of the Euripides volumes was noted by the Harris Library’s Endowment Committee when it was taking stock of the recommendations for purchase suggested by Joseph Pomfret for the ‘Reference Library’. The unusual cost of each volume is indicated by the underscore of the price; ‘£6.6s. each’. The price did indeed impact negatively on the sales of these volumes, especially as their publication dovetailed with the worldwide economic depression following the events of 1929. The press had printed 500 copies of the Euripides, and the Davies sisters decided to donate some of the unsold copies to a selection of libraries and universities in Wales.

The illustrations which Maynard engraved (after Horace Walter Bray) for The Plays of Euripides were inspired by the painting on 5th century BCE Greek vases. The translator was Gilbert Murray, one of the pre-eminent classicists of his generation.