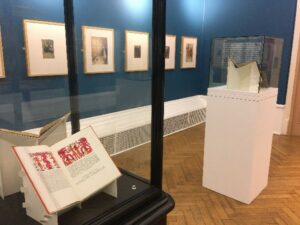 Topiary: an historical diversion by Cecil Stewart, was published in 1954, a decade after the librarianship of Joseph Pomfret, which ended with his death in 1944. This is a production of the Golden Cockerel Press, whose work is well represented in the Private Press Collection. This is one of 500 copies printed on hand-made paper in Pastonchi type. There are thirteen coloured engravings by Peter Barker-Mill.

Cecil Stewart (1911-1964) was a Scottish architect who spent most of his career at the University of Manchester. He was well-known for his work on town-planning but he was also renowned as an authority on Byzantine art and architecture and for his enthusiasm and support for the preservation of Victorian Manchester. The relationship of the art of topiary to architecture was a natural extension of Stewart’s interests.

Peter Barker-Mill (1908-1994) was engaged by Christopher Sandford to make wood engravings for the Golden Cockerel Press in 1937. He continued in this role after the Second World War. Barker-Mill’s highly original illustrations for the Golden Cockerel Press connected 20th century  abstractionist aesthetics to the practice of wood engraving. Barker-Mill’s latter work, which shifted to bold blocks of colour, is reflected is this book.