William Morris, The Life and Death of Jason, Kelmscott Press, 1895 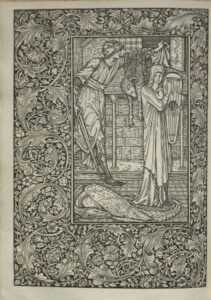 William Morris, The Life and Death of Jason: a poem, (Hammersmith: Kelmscott Press, 1895). On loan from The Harris Museum, Art Gallery and Library (Haslam Bequest).

This magnificent book was bequeathed to the Harris Museum, Library and Art Gallery in 1949, five years after the death of Joseph Pomfret in 1944. It is not known if Haslam had been in contact with Joseph Pomfret about a possible bequest, but it seems likely that Haslam, who was a generous patron of the Harris, would have been aware of the private press holdings of the Library. Haslam was a sophisticated collector of nineteenth-century art; the Harris is especially rich in its collection of paintings by the famous watercolourist William Henry Hunt thanks to the generosity of Haslam. Haslam’s donation of this Kelmscott Press book is certainly one of the most significant holdings of the Harris’ Private Press Collection.

The Life and Death of Jason was written by Morris himself. Printed in black and red on hand-made paper, bound in limp vellum secured with silk ribbons, with wood engraved illustrations by Edward Burne-Jones and initials and marginal decorations by Morris, this book represents one of the finest achievements of the Kelmscott Press. Our copy is one of 200 printed on paper, but there were 6 others printed on vellum. The type used by Morris for this book, Troy, is one of three he designed for his press. The first was ‘Golden’, a ‘Roman’ typeface designed in 1890-91, Troy, a ‘Gothic’ type was the second in 1892, and ‘Kelmscott Chaucer’ the third also in 1892 which was actually a re-cutting of Troy at 12 points from the original at 18 points. All of Morris’ matrices and punches are now held by Cambridge University Press as well as some of the type.

The Life and Death of Jason was well-received when it was first published in 1867. Henry James was enthusiastic in his praise of Morris as a poet:

In this poetical history of the fortunate—the unfortunate—Jason, Mr. Morris has written a book of real value. It is some time since we have met with a work of imagination of so thoroughly satisfactory a character,—a work read with an enjoyment so unalloyed and so untempered by the desire to protest and to criticise. The poetical firmament within these recent years has been all alive with unprophesied comets and meteors, many of them of extraordinary brilliancy, but most of them very rapid in their passage. Mr. Morris gives us the comfort of feeling that he is a fixed star, and that his radiance is not likely to be extinguished in a draught of wind..[1] 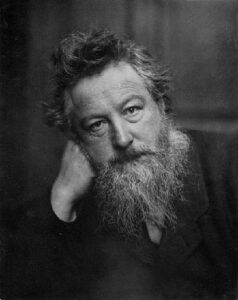 But it is not Morris’ poetry that has survived but the look of this book, as the emblematic fixed star of the private press movement. All of Morris’ aspirations with regard to the production of his books  as described in his ‘Note by William Morris on his aims in founding the Kelmscott Press’ are represented in our example.[2] The type for The Life and Death is suited to its subject. The ink is extremely black, imported from Gebrüder Janecke in Hanover, Germany. The spacings between letters, and words, is minimal and consistent and the paper is hand-made. All of the Kelmscott paper was made by Joseph Batchelor and Son in Kent, who made their paper from linen rags using no bleach. There were different watermarks for the varying sizes of paper required by the Kelmscott books. The design unit of the book is the double page spread, following what Morris perceived as medieval practice. And indeed our senses immediately engage with what Morris has produced, the feel of the paper and the limp vellum cover, the balance and intricacy of the decorative programme and the readability of the text all make for an immersive aesthetic experience which survives the passage of time.

[1]Henry James, A Review of ‘The Life and Death of Jason: A Poem’ by William Morris ,(Boston: Roberts Brothers, 1867) published in North American Review, October, 1867.