William Wordsworth, Intimations of Immortality from recollections of early childhood, 1903 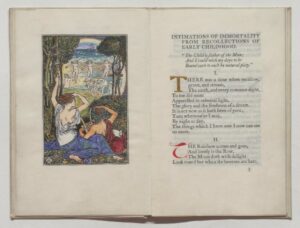 William Wordsworth’s poem, Intimations of Immortality from recollections of early childhood, (completed in 1804 and published in 1807) concludes with the famous lines:

Thanks to the human heart by which we live,
Thanks to its tenderness, its joys, and fears,
To me the meanest flower that blows can give
Thoughts that do often lie too deep for tears.

Wordsworth’s (1770-1850) philosophical approach from nearly a century before, looked back not only to Wordsworth’s own age of childhood innocence, but to a collective spiritual prelapsarian state. The longing of the romanticists synched exactly to the pre-industrialist nostalgia of the Arts and Crafts Movement. The frontispiece to this edition was illustrated by Walter Crane, (1845-1915) whose work we have discussed previously in the context of children’s book illustration, as well as painting and ceramics. Crane had serious Arts and Craft credentials, having studied the work of Dante Gabriel Rossetti during his apprenticeship as a wood engraver, as well as working directly for Morris at the Kelmscott Press, like many who had come to work with Charles Ashbee at Essex House. 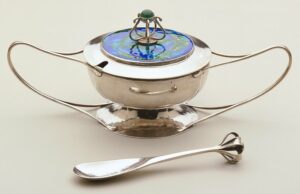 The Essex House Press had grown from Ashbee’s establishment of the Guild of Handicraft in the Whitechapel area of East London. After graduating from Cambridge, Ashbee decided to live in the East End to advocate the teachings of John Ruskin and William Morris to the working population. Ashbee began by starting a series of lectures and discussions on the work of Ruskin that he called ‘the Ruskin Reading Group’ for the benefit of those whom Ashbee called the B.W.M., the British Working Man. The lectures proved to be extremely popular and it was this success that eventually led to Ashbee’s establishment of the Guild of Handicraft. The first book printed by Ashbee at the Essex House Press in 1901 was the record of the evolution of this group. The book was entitled, An endeavour towards the teaching of John Ruskin and William Morris; Being a brief Account of the work the aims and the principles of the Guild of handicraft in east London.

Intimations of Immortality was the ninth book in the 14 book Great Poems series created by Ashbee. There were only 150 copies of this book printed. Anastasia ‘Annie’ Power, who had directed the bindery at the Guild, provided hand coloured initials and Florence Kingsford hand-coloured Crane’s frontispiece design. Many of the artisans that worked for Essex House had expertise in various medias. Ashbee himself designed in a broad range of disciplines including architecture and metal work. His work in silver is particularly sought after by collectors today.