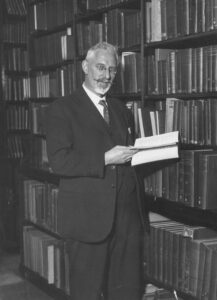 Joseph Pomfret’s career as a librarian coincided with a period of great growth and innovation with regard to the establishment of public libraries in England. Pomfret himself was committed to furthering the accessibility of libraries to all, and to building the holdings of libraries to reflect the needs and interests of the population they served.

Pomfret was born to a farming family just outside of Blackburn in 1878. He began his career training at the Blackburn Museum, Art Gallery and Library, as a deputy librarian and found his first job as Librarian of Darwen Library in 1906. Twenty-two years later, in 1928, Pomfret was appointed Preston Borough Librarian, a position he held until his death in 1944. Pomfret was instrumental in the opening of a reading room in Preston’s town hall, as well as a young person’s library and reading room within the main library itself. He argued successfully that the communities beyond the town centre needed access to libraries, and supervised the establishment of a lending library at Ribbleton.

Pomfret’s daughter, Joan Townsend (1913-1993), was a well-known dialect poet known as Joan Pomfret. In a radio interview she recalled her happy childhood home in Blackburn with her parents, and spending time with her father ‘walking up over the tops’, but she makes no mention of him as a collector of books. This activity he seems to have pursued on behalf of the Harris Free Public Library at Preston.

The collection of private press books held by the Harris Museum, Art Gallery and Library is often referred to as the Pomfret Collection. The private press movement which championed the handcrafting of all aspects of a book’s components, is most often attributed to William Morris and his creation of the Kelmscott Press. The Harris now holds over 300 examples of private press books, many of which were purchased on the advice of Joseph Pomfret. The Preston Free Library Committee minute book, 1929-1946, does not record a date for the initiation of the purchase of books particularly to do with the private press movement. However, it does record that by 1934, the twelfth year of Pomfret’s role as Chief Librarian, that the Harris’ holdings of private press books was significant enough for examples to have been loaned to the Burnley Corporation for exhibition in their Free Public Library. It is also noted that on 12th February, 1934, a copy of The Golden Legend printed by Wynkyn de Worde in London in 1498 was bought for the Library for £27. Pomfret seems to have been interested in acquiring examples of early fine printing as well as later work.

An undated note on suggested additions to the reference library, probably composed in the 1930s, records that the Library Endowment Committee sanctioned the special purchase of books on science and technology. This was to bring the collection up to date for the benefit of local students and general readers. It notes also that this policy will be continued to enhance the library’s holdings on fine arts, ceramics, textiles, furniture, modern fine press books and antiquities. These books are intended for the reference, as opposed to the lending library, and some are folio and quarto size, and therefore more expensive than the usual book purchases. The list which follows may indicate the beginning of Pomfret’s build of the private press material. Listed for purchase are books such as The Iliad (1931) from the Nonesuch Press, the Works of Spenser (1930) from the Shakespeare Head, The Psalter (1927) from the Golden Cockerel Press, and the Plays of Euripides (1931) from the Gregynog Press. The Gregynog volumes are the most expensive on the list; it is noted that the cost of the volumes is £6-6s.