The James Dunn Collection by Dr Cynthia Johnston: Costume of the Russian Empire 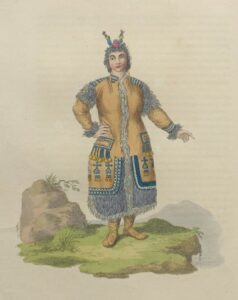 Edward Harding (1755-1840) was many things: Librarian to Queen Charlotte, publisher, portrait painter and accomplished engraver. The National Portrait Gallery associates him with 186 portraits. Looking at these paintings, many of fashionable families at their country estates, posing with their children and pets in Capability Brownesque landscapes, you might for a moment think you were looking at a Gainsborough on a bad day. But Harding also produced a range of other material, including a series of historical portraits including Mary, Queen of Scots, Henry V, Henry VI, Elizabeth Woodville and Anne Boleyn as well as a series of popular actors in contemporary plays.

Harding and his brother Silvester ran a successful printing and publishing business in Fleet Street established in 1786. By 1792, they had moved ‘up town’ to premises at 102 Pall Mall. This may have been when Harding came to the attention of the royal household. Most of the theatrical portraits published by the brothers were drawn by Silvester, who had himself pursued a theatrical career for a short while. The engraving for these portraits was often done by Francesco Barolozzi, an Italian artist resident in London. James Dunn collected other examples of Barolozzi’s work, including his The Gardens, published in London in 1798. 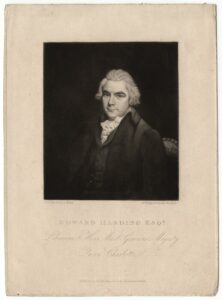 Edward Harding began his career as a hairdresser, but soon transferred his energies to the printing trade. According to Edward Harding’s obituary, which appeared in the Gentleman’s Magazine in December 1840 (Volume 168), Harding missed an enormous financial opportunity in declining the offer of the newly formed Religious Tract Society to serve as their publisher. By this time, Harding had already taken up his post as Librarian to Queen Charlotte. During his time in post, Harding lived at the Royal Lodge at Frogmore. His opinion on the recent renovations would be interesting to hear. In his role as Queen Charlotte’s librarian, Harding acquired many illustrated works. The finest of these are listed as the Lives of Cibber and Garrick in folio and the Visit of Christian the Fourth, King of Denmark to James I of England, from the Queen’s own manuscript. However, Harding’s greatest accomplishment is considered his Theatrical Portraits, forming 8 folio volumes. The obituary closes by saying ‘..his natural cheerfulness of disposition and urbanity of manners rendered his society a delight to all his acquaintance’. From hairdressing to the Queen’s Librarian, Harding certainly found his métier.

Costume of the Russian Empire is a representative of the finest of Harding’s work as an engraver. It contains over 70 delicately coloured engravings with text in English and French.