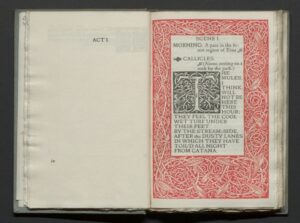 28 May 2020
By Dr Cynthia Johnston, Institute of English Studies, School of Advanced Study, University of London

Along with this Vale Press book, Dunn has several other examples from this innovative press and publisher including:

Dunn also holds one of the 39 volumes which comprised the Vale Press’ masterpiece, the complete works of Shakespeare. The Vale Press’ The Tragedy of Hamlet, Prince of Denmark was published in 1900. With his 11 Vale Press titles, Dunn collected nearly a quarter of the Press’ 46 books (with the Shakespeare volumes being counted as a single entity). 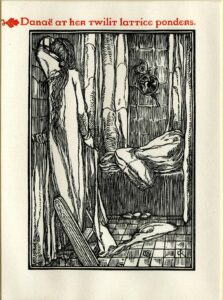 A woman standing in a narrow room; illustration to Thomas Sturge Moore, Danae, Vale Press, 1903. Woodcut with title in letterpress printed in red. © The Trustees of the British Museum (CC BY-NC-SA 4.0)

Charles Ricketts (1866-1931) was an important contributor to the private press movement. Along with his life-long companion and collaborator, Charles Shannon, Ricketts designed woodcut illustrations and type fonts which had tremendous influence on contemporary designers. Ricketts founded the Vale Press (1896-1904) which produced outstandingly beautiful editions admired by the leading lights of the Aesthetic Movement of the 90s including Aubrey Beardsley and Oscar Wilde. Ricketts was also a set designer, like one of our previous artists, Frank Cayley Robinson. Ricketts designed sets for Wilde, as well as Yeats and Shaw. In many ways, the Vale Press was quintessentially emblematic of the Arts and Crafts Movement with Rickett’s passionate attention to crafted design and artisan production. When the Vale Press burnt to the ground in 1904, Ricketts famously threw his fonts: the Vale, the Avon and the King’s, into the Thames rather than have them be subjected to ‘unthinking use’. [1] ‘Punches, matrices and type’ all vanished into the tide.

In addition to his Vale Press books, Dunn also collected other examples from the private press movement. The Complete Works of William Wycherley, 1924, The Writings of William Blake, edited by Geoffrey Keynes, 1925, John Sparrow’s edition of Cowley’s The Mistress and other Poems, 1926 and The Temple by George Herbert, 1927 were from the Nonesuch Press. C’est d’Aucassin et de Nicolette was published by the Eragny Press in London, 1903. This press was established by Lucien Pissarro, the son of the Impressionist painter, Camille Pissaro; a fitting purchase for the Francophile Mr Dunn.