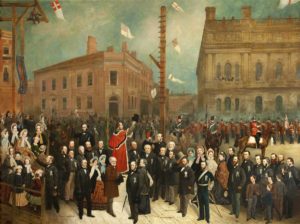 To mark International Women’s Day, Catherine McManus has taken a closer look at a painting in the Collections at Blackburn Museum and Art Gallery. Catherine is the museum’s intern and presents her findings here.

Vladimir Sherwood began working on “Laying the Foundation Stone to the Cotton Exchange, Blackburn” in 1863 and, until now, relatively little research has been done to identify the women in his painting. By browsing old newspaper articles and looking at census records however, new information regarding the identities of some of the women in the painting has come to light. In July 1864, the Blackburn Standard reported on some of the “local celebrities” present in the piece, notably commenting that: “Mrs. Feilden, Mrs. Sturdy, the Misses Feilden, the Misses Sturdy and Miss Thwaites are the ladies whose portraits have as yet found expression on the canvas.” Using old census records and the process of elimination, I began to try and discover which women in the painting might have matched up with the newspaper report at the time it was published.

In the 1861 England census, Frances M. Feilden is recorded as living with her husband Joseph Feilden and their three unmarried daughters in the civil parish of Witton. Her age is recorded as sixty-three years old, and her daughters respectively are identified as: Frances Mary Feilden (40), Margta Prica Feilden (30) and Charlotte EW Feilden (21). According to the 1864 report, the Feilden women were amongst those Sherwood painted into the portrait—and certainly Joseph Feilden and his son Henry Master Feilden were also present. It is notable that four women of varying ages are grouped together amongst the crowd of men, standing in front of the schoolmasters and to the left of Henry Master Feilden. Such positioning hint at their relation to Henry Master Feilden, but it also signifies their connection to local educational endeavours. According to R.D.S. Wilson’s The Feilden’s of Witton Park:

The Feildens also maintained close ties with St. Mark’s Sunday School and in May 1856, for example, Mrs. Feilden and the Misses Feilden attended a presentation by the scholars and teachers, of two books, to one of the teachers, a Miss Hopwell. Appreciation towards Miss Feilden was shown by the teachers and scholars of St. Mark’s Sunday School in December 1865 when she was presented with a walnut writing table, or Davenport, with a suitable inscription on a silver plate inserted into the lid, as “a spontaneous outburst of good feeling on the part of all the school, not elicited by any unusual event, but coming naturally from hearts overflowing with love and gratitude to their beloved superintendent and teacher.”[1]

Their link to the local schools would certainly explain why they were painted by the schoolmasters instead of residing in the women’s stand, and Wilson’s research shows that it was not unknown for the Feilden women to accompany Joseph Feilden to other important or ceremonial events:

He [Joseph Feilden] was on the building committee of the new Infirmary and later gifts included one of £5 in 1863, together with his wife and one of his daughters, he accompanied Mrs. W. E. Gladstone, wife of the then Chancellor of the Exchequer, on her visit to the infirmary.[2]

Given their frequent charitable work and regular presence at other ceremonial events, I think it is likely that this group of women consists of Mrs. Frances M Feilden and her three daughters.

The Sturdys and the Thwaites’

Initially during my investigation of sources, I had presumed the Thwaites and the Sturdy families were unconnected. I had thought that Miss Thwaites might be present in connection with another individual in the painting. After researching Mrs Sturdy however, I discovered that her maiden name was Ellen Thwaites and came to the conclusion that the Miss Thwaites present was likely Ellen Sturdy’s unmarried sister.

In the 1861 England Census, James Barlow Stewardson Sturdy is recorded as being 68, and his wife Ellen Sturdy (formerly Ellen Thwaites) is recorded as being 40 years old.[3] This seems to conflict with the data on ancestry library, which puts his lifespan from 1812 to 1867, making his age of death 54 years old.[4] The James Barlow Sturdy in the painting certainly appears younger than the census records make him out to be, and it is not impossible that this data was entered incorrectly on the census.

According to the 1861 Census, two are also daughters living in the household at this time: Clara Ellen Sturdy (9 years old) and Nora Sturdy (6 years old).[5] By the time of the painting in 1863-64, they would have been approximately twelve and nine years old respectively. These could easily have been the ages of the girls standing in the ladies platform.

Bearing in mind that Mrs Sturdy and two of her daughters are recorded as living in Blackburn two years prior to the painting—and that these two women bear a close resemblance to one another—I surmise that this group consists of Mrs Ellen Sturdy, her daughters Clara Ellen Sturdy and Nora Sturdy, and an unknown sister referred to as Miss Thwaites. Ellen Sturdy had at least four unmarried sisters living in a household together in Blackburn around this time, so any of these are potential candidates for being displayed in the portait.[6] The fifth older woman dressed in black may also have been a member of the Thwaites household who was added into the portrait later on, but without a written record confirming that another Thwaites sister was added into the painting, it is difficult to identify her with any certainty.

Part of the challenge involved in researching Victorian women is that individual identity is so often subsumed in favour or marital status or male relations. First names are seldom mentions outside of census records, meaning that a large portion of investigation is simply a process of elimination. Further analysis of sources has shown that several of these women did in fact play a significant role in the community, and it is important to recognise and celebrate their presence and achievements into the present day.