The 53 Stations of the Tokaido Road by Utagawa Hiroshige Exhibition 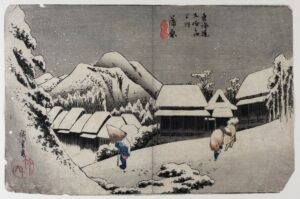 The 53 Stations of the Tokaido Road by Utagawa Hiroshige

The Tokaido Road (literally meaning Eastern Sea Route) linked Imperial Kyoto in the east of Japan with Edo (Tokyo) in the west.  Following the Pacific coastline, it provided a functional yet inspiring experience for those who travelled along it.

Utagawa Hiroshige first travelled the Tokaido Road in 1832, when he was part of an official procession transporting horses to the imperial court.  During the journey, he sketched local people and travellers in a variety of landscapes and seasons, upon his return to Edo he created the collection of prints known as The Fifty-Three Stations of the Tokaido Road.

The post stations featured in the series were created by the Japanese government in the 17th century as resting places for travellers along the 500km route, which, over time, developed into distinct villages.

Hiroshige is considered to be one of the last great masters of the Ukiyo-e art form.  The Fifty-three Stations of the Tokaido Road was so popular that he reissued it three times.  The popularity of Hiroshige’s art has flourished for almost 200 years, his influence can been seen in works by artists such as Vincent Van Gogh and Claude Monet and he continues to inspire to this day.